Why FreeBSD? Being users of various GNU/Linux distributions, the most recent being ArchLinux. BSD has always been a pending issue. So we did not miss the opportunity to see how FreeBSD behaves, with more than interesting results.

BSD at a glance from an SBC

As Archlinux users for more than 10 years. Users can get to know the advantages and disadvantages of a 'rolling release' or continuous update distribution. Archlinux today only focuses on x86_64 in the past that was not the case. The arrival of SBC computers like the orange pi, helped a lot to have a quite portable computer, and at the same time cheap in which you can try more than one distribution like Armbian, Devuan or Archlinux or Various Operating Systems like NetBSD or FreeBSD, so these are excellent times for 'the world of other Operating Systems' or the 'world of alternative operating systems'.

That was our case. We first tried NetBSD, a quite interesting distribution where by the way one can try emacs-20, from the last century (1998), and for this fact alone it is worth trying NetBSD. NetBSD has better support for the orange pi SBC compared to FreeBSD. In general it was much easier to install NetBSD in opipc than to install FreeBSD in opipc, NetBSD works with a u-boot compiled by yourself, whereas FreeBSD only works with the u-boot that FreeBSD itself provides us.

With FreeBSD on the opipc, the opipc only works as a headless computer (no monitor, HDMI output not yet supported on FreeBSD-12.1). But we did manage to configure Emacs to run when FreeBSD is booted into opipc. (Then we also managed to test FreeBSD on the thinkpad x220, everything works ok). It is also interesting to note that FreeBSD arm-32bits is a Tier-2 architecture that means not all packages are available for installation, for example the firefox package is not available for installation but users would have to compile it themselves. same or rather cross-compile with poudiere on a more powerful machine (maybe Thinkpad), since compilation of such large packages is still quite slow on opipc, To which should also be added the consideration of the useful life of the USD. It might suddenly be easier to compile some other browser. If anyone knows of any let us know. 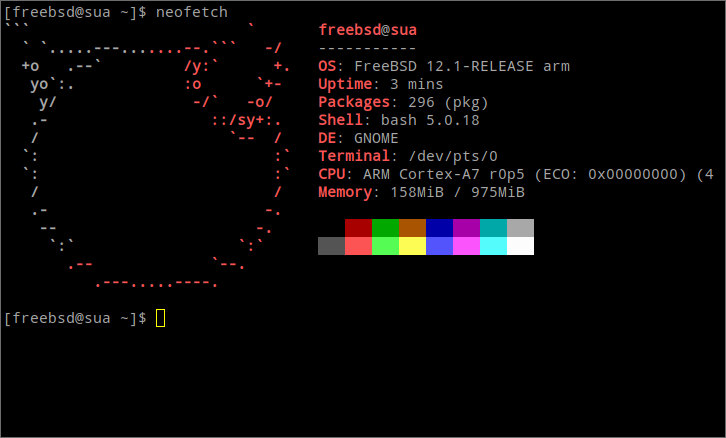 FreeBSD on the Asus VivoBook X540

We also have an Asus VivoBook (X540B) that has win10 installed. This machine would be a good candidate to become a mobile terminal to ssh into our SBC (which works like a desktop since it is always on). We have 2 pendrives (USB memory) one with arch32 and the other with FreeBSD-amd64. The purpose of the developers of the Archlinux distribution and the FreeBSD operating system in making these installation images available is that the user can install their distribution or Operating System on the hard drive through them.

We tried the arch32 distribution on the Asus VivoBook, but for some strange reason the iwd service for the wireless connection did not start correctly. The next step was to test FreeBSD-amd64 on this machine and so we did. We booted it the first time and encountered several drawbacks (all of which are happily surmountable):

Mention that the driver for the amd stoney graphics card for this laptop is gpu-firmware-amd-kmod-stoney.

1. Wireless network card is not working properly in FreeBSD stable/13.

2. As a dvorak user you have to change the keymap to dvorak to this you have to add mapping the console to dvorakx as well.

3. The keyboard has a problem, when you press a key, the character of the pressed key appears on the screen many times at the same time.

1. The FreeBSD release/13 does not contain the rtw88 driver. You have to manually update to FreeBSD stable/13, so that the network card can be recognized.

2. To change the keyboard from qwerty to dvorakx. It was done with the command kbdcontrol -l us.dvorakx or keymap="us.dvorakx" in /etc/rc.conf. And then we change the AltGr to Alt. using the output of the kbdcontrol -d command.

We are still in contact with the developer of the rtw88 network driver. Well, the driver is not stable enough. Perhaps when you reader friend reads this article, this problem could already be solved.

We are also in contact with the developer of the iichid driver, which is necessary for it to recognize the elantech brand touchpad and the elan1200 model that is the one that comes in this laptop.

If you want to see the dmesg for this laptop you can find it at: 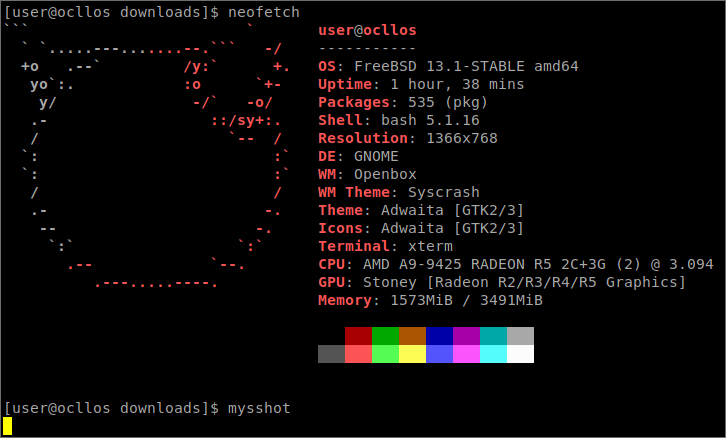 
Using the phone as usb-ethernet

Alternatively the phone can be used as usb-ethernet (hint ue0). 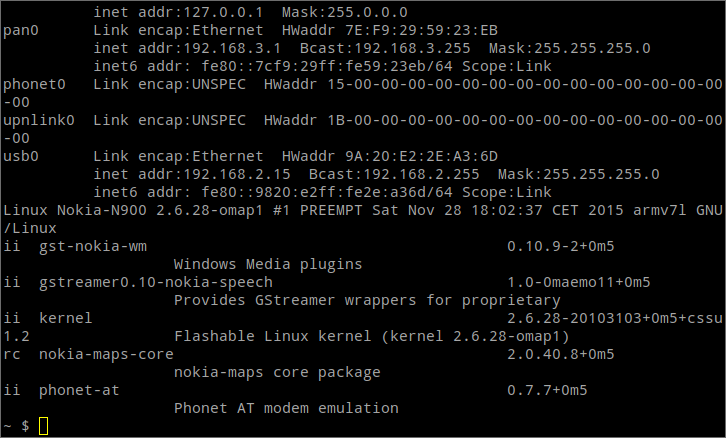 We also experimented with trying to just use the installation stick and put our configuration there to test X and xterm. and we find ourselves with 2 difficulties that are also worth noting.

2. pkg issues. When doing 'pkg update'. 'No space left on device'. It was resolved by editing /etc/fstab and giving the /var partition more space.


How to visually know if ArchLinux or FreeBSD is running?

Only the font and the icon of the xterm. 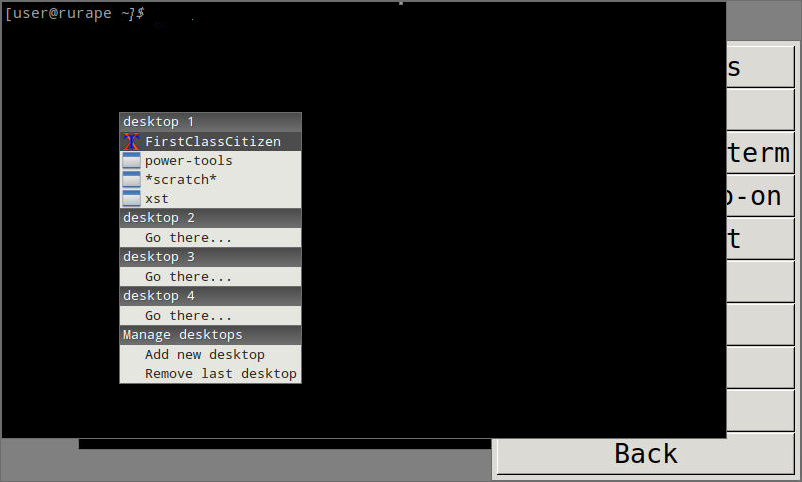 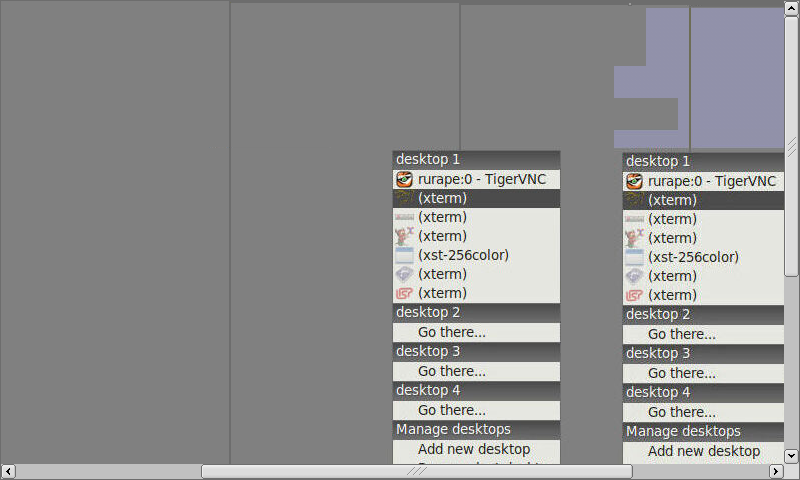 We hope in the not too distant future to install FreeBSD-13 on opipc. If you read correctly, install, since the ARM architecture is tier-2 (it has to be installed, it is not updated). On top of that, 32-bit is becoming obsolete very quickly. So we'll probably write an article about FreeBSD-13 on the opipc SBC soon.